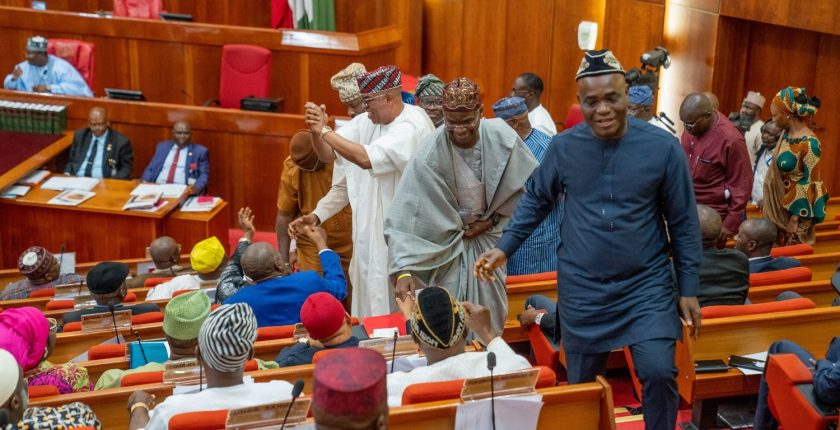 ABUJA- AFTER five days of the screening exercise, the Senate will today confirm the 43 ministerial nominees forwarded to it by President Muhammadu Buhari.

President of the Senate, Senator Ahmad Lawan, who disclosed this yesterday after the screening of nine nominees, said that three remaining nominees – the Immediate past Minister of Information and Culture, Chief Lai Mohammed from Kwara State; Sabo Nanono from Kano State; and Engr. Saleh Mamman from Taraba State, will be screened today.

After the screening of the three nominees, Senate President Lawan said the Senate will same day, confirm the nominees for onward presentation to President Buhari to assign portfolios and swear them in as ministers.

Lawan said: “Tomorrow (today) by the grace of God, we will be taking three nominees. We will do the approval and confirmation of all the screened nominees tomorrow.”

Of the 40 nominees screened so far, 20 were given the privilege of ”take a bow and go” without being subjected to the rigours of questioning by senators.
Take a bow and go nominees

Why Nigerians ‘re being killed in South Africa – Onyeama

Meanwhile, the immediate past Minister of Foreign Affairs and a ministerial nominee from Enugu State, Geoffrey Onyeama, yesterday, attributed the issue of Xenophobia in South Africa where Nigerians were being killed to lack of trust between Nigerians there and the Police.

Onyeama told the senators during the screening that he had opened discussions with the Nigerian community in South Africa towards seeking understanding and cooperation of the country’s security agencies, particularly the Police.

Asked Senate President Lawan what he would do differently, if returned to the Foreign Affairs Ministry, Onyeama assured that with sustained communication between the Nigerian community in South Africa and the Police, the narrative would change for the better.
Onyeama said:” I went to South Africa and I discovered that there is trust deficit between the South African police and Nigeria. We held a meeting and the idea is to build confidence and ensure that the Nigerian community in South Africa can talk to high level officials in the country.

“Members of the Nigerian community told me that they know the criminal elements from Nigeria but because of the trust deficit it is difficult to have interface at that level.”

Responding to question from the Senate Chief Whip and senator representing Abia North, Orji Uzor Kalu on the hostility of other nations to Nigerian investors in their countries, Ambassador Onyeama promised to open discussion with the business community in Nigeria to address the challenge.

However, during the screening of Goddy Jeddy- Agba (Cross River), there was a mild drama between Senate President Lawan and Senator Dino Melaye, PDP, Kogi West over alleged corruption status of some ministerial nominees.

Trouble started during the question and answer session when Senator Melaye, who had risen to commend President Buhari for appointing Goddy Jedy -Agba, noted that he was one of the nominees being investigated by the Economic and Financial Crimes Commission, EFCC.

Not comfortable with the statement, Senator Lawan who quickly interrupted Melaye by hitting his gavel very loudly, said: “All the nominees before us went through security clearance and if anyone has any EFCC case the constitution of the Federal Republic of Nigeria provides for innocence until proven guilty. So none of our nominees is a convict.”

Not satisfied with the interjection by the President of the Senate, Melaye reiterated that some are undergoing investigation saying he has not passed judgement.

According to him, the issue has been shrouded in a lot of secrecy which he noted was responsible for the major corruption in the country, adding that the greatest corruption is in the oil sector and the greater percentage of that comes from the subsidy regime.

He said the best way to stop pipeline vandalism is to lay solid pipes that vandals will find very difficult to destroy while drones should be deployed to monitor those pipes and pour hot water on the vandals.

He also promised to end fuel subsidy, saying the government does not need to spend trillions of tax payers’ money to subsidise imported refined petroleum products once crude is taken directly to the existing functional refineries across the country.

He said he would work to ensure what he termed optimum functionality of all the government owned refineries as well as the completion of privately owned refineries under construction, and the establishment of modular refineries.

He called for the establishment of a control room equipped with competent professionals and modern technology to end oil theft and pipeline vandalism.

Also, immediate past governor of Osun State, Ogbeni Rauf Aregbesola while responding to a question on taxation, said that for Nigeria to have a just taxation system, the rich or the wealthy in the society must be specially taxed to bridge the wide gap between them and the poor on one hand , and in raising the revenue profile of the country for infrastructural development.

Ministerial List: 18 out of 31 Screened ministerial nominees have been asked to take a Bow and Go(Opens in a new browser tab)

He said: “There is need to put in place privileged taxes for those who have huge resources as a way of raising revenues for the country and bridging the wide gap of inequality between the rich and the poor in the society. We have stopped the rich men in Nigeria from discharging their responsibility in tax. I will recommend serious taxation for wealthy people in Nigeria. I will go for just taxation.”

On salary arrears he owed as governor, Aregbesola said: “I will say the narrative of salary in Osun is mischievous. We paid huge attention to capital projects. Personnel cost alone on my revenue was 60% Osun civil service in Osun was huge and top heavy. The fat cat in level 8 and above, which is less than 30% take over N2 Billion. Short of sacking people, I have to constitute a committee with Comrade Sunmonu to trace revenue flow. I never owed level 1-7 and salary.”

Meanwhile, the opposition Peoples Democratic Party, PDP, has asked the Senate to accord some credibility to the ongoing ministerial screening by sending the names of the nominees to the EFCC for its input.

The party in a statement signed by its image maker, Kola Ologbondiyan said the screening exercise must have enabled the lawmakers to find out that many of the nominees presented to it by President Buhari include individuals, “who as former governors and ministers, wrecked their states and ministries and have serious allegations of corruption, abuse of office and stealing of public funds hanging on their necks.”

According to the statement continued: “The PDP calls on the Senate to note that some of the nominees have failed to defend their corruption allegations. This includes a particular former minister from the North Central, who had admitted to the Independent Corrupt Practices and other related offences Commission, ICPC, of complicity in the N2.5 billion National Broadcasting Commission, NBC, fraud case, still pending in court.

“This is in addition to certain nominees who, as state governors, swindled their states, fleeced workers and committed several financial crimes for which they should rather be standing trial, instead of being rewarded with official protection as ministers.

“The PDP also invites the Senate to note that President Buhari has not demonstrated any commitment to the fight against corruption and for that reason, Nigerians now look up to the National Assembly to protect the nation from the excesses of the Buhari Presidency.”