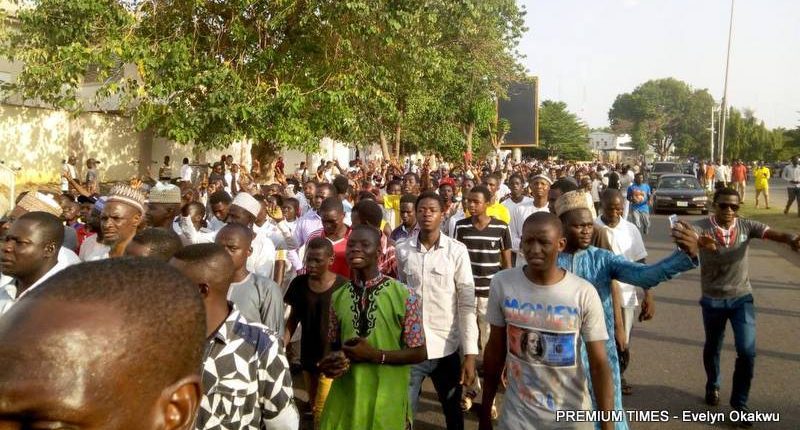 The presidency on Saturday defended the proscription of the Shiite Islamic Movement of Nigeria (IMN).

PREMIUM TIMES reported how the federal government on Friday secured a controversial order from a high court to ban the group.

The order was obtained ‘exparte,’ meaning other interested parties such as the IMN were neither notified nor allowed to be present before the court gave the order.

The government based the order on the protests by the group which turned violent in the past week leading to the death of over a dozen people.

The victims include a senior police officer, a journalist and about a dozen Shiites.

The government accused the Shiites of embarking on violent protests, but the Shiites said their peaceful protests were attacked by armed security operatives.

Amnesty International and the Committee to Protect Journalists have called for an independent probe of the killings. Although the probe has not been done, the presidency blamed the Shiites for the death of the police officer and the journalist, who was a youth corps member.

The Shiites are protesting the continued detention of their leader, Ibrahim El-Zakzaky who has been detained since December 2015 after soldiers killed over 300 of his followers for allegedly blocking a road being used by the army chief Tukur Buratai. Mr El-Zakzaky and his wife, Zeenah, were initially detained for about a year without trial. They are now being tried in Kaduna for the death of a soldier during the December 2015 incident.

It was based on the violence lat week that the government moved to ban the group.

The ban has been condemned by senior lawyers and human rights activists who say it is an infringement on the freedom of religion guaranteed by the Nigerian constitution.

In a statement on Sunday, the presidency said the proscription has nothing to do with banning the larger number of peaceful and law abiding Shiites in the country from practicing their religion.

“Instead it was to discourage wanton violence, murder and willful destruction of public and private property,” the presidency said.

The presidency alleged that the organisation has been taken over by extremists who do not believe in peaceful protests and instead employed violence and arson, driving fear and undermining the rights of others and constituted authority.

The statement was first made available through a Twitter thread on Sunday evening.

GOVERNMENT OUTLAWED CRIMINALITY OF IMN, NOT FREEDOM OF WORSHIP — PRESIDENCY

The Presidency says the proscription of Islamic Movement of Nigeria (IMN) has nothing to do with banning the larger numbers of peaceful and law abiding Shiites in the country from practicing their religion. Instead it was to discourage wanton violence, murder and willful destruction of public and private property.

Contrary to the claim by IMN that it had been banned from practicing its religion, President @MBuhari’s administration has not banned Shiites from observing their five daily prayers and going to Mecca to perform the Holy pilgrimage. Their position is blatantly false & deceptive.

The IMN is deliberately changing the narrative in order to gain sympathy & divert the attention of the world from its terrorist activities, including attacking soldiers, killing policemen & a youth corps member, destroying public property, consistently defying State authority.

The Presidency notes that the banned organization was taken over by extremists who didn’t believe in peaceful protests and instead employed violence and arson, driving fear and undermining the rights of others and constituted authority.

The Presidency agrees that the constitution protects freedom of worship, but not to the detriment of the society, especially where such freedom harms others, and breaks law and order.

The Presidency insists that such criminal behavior and disregard for rights of others and human life will not be tolerated by any responsible government.

Everywhere in the world protesters operate within legal boundaries and conduct themselves peacefully without molesting others, or engaging in murder and killing of security personnel or destroying public and private property.

The Presidency regrets that despite all efforts by the government and other well-meaning Nigerians to make the IMN militants to see reason and abandon violence, such appeals fell on deaf ears as they killed, maimed and destroyed willfully, constituting daily nuisance to workers, commuters and other innocent citizens.

Having defied appeals to operate peacefully, and given their seeming determination to destabilize the country, the government had to act before the situation goes out of control, after admonishing many times over that people should not use religion to perpetuate lawlessness.

We are fighting lawlessness and criminality and not pursuing a policy of discrimination against any group. You cannot be in court while at the same time engaging in violent protests, molesting people and inflicting pains on others, which includes taking innocent lives.

GOVERNMENT OUTLAWED CRIMINALITY OF IMN, NOT FREEDOM OF WORSHIP — PRESIDENCY#Thread