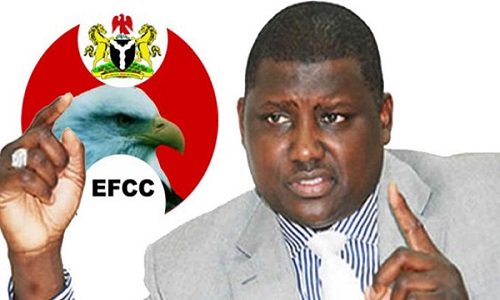 Former Economic and Financial Crimes Commission (EFCC) by the Department of State Services (DSS), it was learnt on Wednesday.

He was arrested in Abuja on Monday be DSS operatives.

Maina, who was looking pensive, was brought to the anti-graft agency about 5.30pm.

The suspect was quizzed over alleged N2 billion biometrics contract.

It was also learnt that Maina was interrogated over his choice assets in Kado Estate, Abuja, some properties in Kaduna and a large farm in Keffi, the Nasarawa State capital.

A source, who spoke in confidence yesterday, said: “Maina, who we had earlier declared wanted, was brought to EFCC by the DSS a few hours ago. The security agency handed him over after the completion of its profiling on him.

“You know Maina has been hiding in Dubai, the United Arab Emirates (UAE) and some neighbouring countries and there is need to de-brief him on certain security challenges associated with him.

“For instance, intelligence report indicated that Maina was asked how he always succeeded in sneaking in and out of the country and his connection with a safe house in Abuja.

“But as soon as he was handed over to the EFCC, detectives isolated issues for him on the N2 billion biometrics contact. He was also asked to make statement on the funding of the defunct Pension Reform Task Team.

“He has also been asked to explain how he came about choice assets in Abuja and Kaduna.

“The investigation might also be extended to his activities as a former director in Customs, Immigration and Prisons Office (CIPPO), which he superintended with huge cash flow.”

Replying a question, the EFCC source said: “He will soon be arraigned in court because we have already preferred charges against him.

“As far back as July 21, 2015, Maina was arraigned at a Federal High Court on a 24-count charge with a former Head of the Civil Service of the Federation, Mr. Steve Oronsaye, Osarenkhoe Afe and Fredrick Hamilton Global Services Limited.

“He is expected to face trial for charges bordering on procurement fraud and obtaining by false pretence.

“What detectives are doing now is to obtain a statement from him on some findings about him before the court proceedings.”

Asked of his status, the source added: “Maina was in pensive mood; he never expected that the law would catch up with him.”

Also yesterday, Maina’s 20-year-old son Faisal, was alleged to have pulled a pistol on security operatives who arrested him and his father on Monday.

DSS spokesman at the services national headquarters in Abuja, Dr. Peter Afunanya, made the allegation in a statement.

It explained that the arrest followed a request by the EFCC to apprehend the suspect.

The statement said: “Maina was arrested in company of his 20-year-old son, Faisal Abdul-Rasheed Maina, who unsuccessfully tried to resist the arrest.

“The lad even pulled a pistol against the security agents involved in the operation. He was, however, disarmed and arrested. He is a final year student at the Canadian University of Dubai where he is studying Telecoms Engineering.

“The suspects and the recovered items will be handed over to the EFCC for further investigations and appropriate necessary actions.

“It is instructive to note that the operation is as a result of a renewed interagency collaboration among security and law enforcement agencies.

“The Service has always subscribed to such collaboration believed to be important in national security management and therefore, hopes to sustain the initiative in mitigating the current threats against public safety and national critical assets.”

Maina, who was picked up by DSS operatives in a hotel in Abuja, had in 2017, been declared Maina wanted, following his refusal to honour the commission’s invitations.

But in his bid to evade the long arm of the law, Maina, on September 5, 2018, in a suit  asked the court to decide whether the Commission can lawfully exercise powers of declaring him wanted, either on its official website or any other media platform, or ‘harass him.’

She also gave an order of perpetual injunction, restraining the EFCC and its affiliates or related bodies from further declaring Maina wanted in relation to the issue of the pension scam.

The EFCC said the judgment must not be allowed to stand and headed to the Appeal Court.